Bubba Kush is known for a super pungent aroma and an exotic hash-like flavor. An abundance of trichomes makes Bubba Kush sticky like honey. Bubba Kush Strain has a sweet earthy smell similar to roasted coffee beans and chocolate.

Bubba Kush strain is an indica dominant hybrid commonly referred to as Bubblegum Kush. The genetics come from a cross of OG Kush and Indiana Bubblegum. The Bubba Kush lineage began in the early 90s outside Denver, Colorado. Then around 1996, BK made its way to the Los Angeles neighborhood of Silver Lake where it would eventually be discovered by B-Real from the hip-hop group Cypress Hill. Many other artists in the area embraced the strain and shortly after, “Kush Fever” started spreading throughout the US.

Bubba Kush has THC-A levels ranging from 23-27%. CBD and CBG levels are low, both under 1%. Many patients prefer this strain for its ability to alleviate stress, depression, insomnia, and ADHD. Although Bubba Kush has the potential to relieve many afflictions, it’s not a daytime strain; that is unless you’re looking to sleep the day away.

This exquisite strain is known for its distinct smokey purple-colored leaves with dark forest green flowers. Most buds are medium-sized and fairly dense. Frosty silver trichomes coat the buds giving them an icy appearance. An abundance of trichomes makes Bubba Kush almost as sticky as honey.

BK has a sweet earthy smell similar to roasted coffee beans and chocolate. A piney and rich hash-like flavor give Bubba an exotic taste with a lovely and distinctive aroma. The exhale is light and spicy with an addicting woodsy and sweet kush aftertaste. Bubba Kush has a memorable taste that is distinctive from other Kush family strains. BK is an ideal strain for cooking with. The earthy flavors pair well with many foods and don’t overpower more subtle ingredients.

Bubba Kush is very high in the terpene humulene which is an effective antibacterial and anti-inflammatory terpene. With lesser amounts of caryophyllene, limonene, B-Pinene, and myrcene; some of the medical benefits of these terpenes include reducing anxiety, relief from heartburn or gastric reflux, and as a bronchodilator (helps open airways).

Bubba Kush is a popular medicinal strain used for relieving insomnia, stress, depression, nausea, and aches from arthritis. Almost instantly, the high from Bubba Kush strain can be felt right behind the eyes, then it quickly drops down into the body, turning your limbs to jelly. While this indica has a very strong body high, additional feelings of giggliness and euphoria linger in the head for several hours. The warm body effects make lounging and relaxing an enticing option.

Bubba Kush seeds have high germination success rates and produce hearty, effortless growing plants. Indoor flowering takes 8-10 weeks. Bubba Kush is a large yielding plant with heavy bud density and an average yield of 500 grams per plant indoors or outdoors. Outdoor plants grown in the northern hemisphere will grow to maturity during mid-October. BK is an easy to grow and low-maintenance plant that reaches heights of 2-4 feet. This low profile plant is ideal for indoor gardens and stealth outdoor grows. Bubba Kush shows resistance to molds, pests, and bugs while maintaining good side branching and a distinctive, chunky bud structure. Bubba Kush’s hashy qualities make it a smart choice for those looking to extract oil or concentrate from the strain.

Plant is doing good and getting big almost ready to harvest 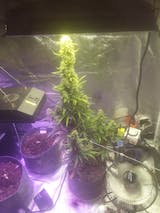 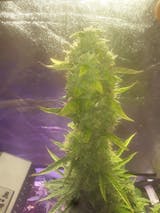 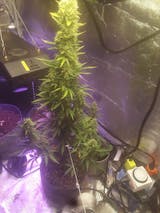 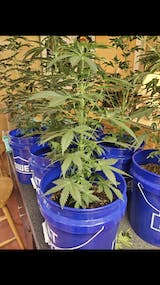 I can’t be any happier yous are awsome everting great 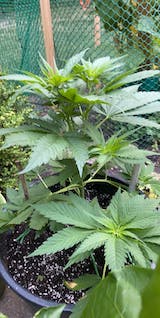 Purchased 3 seeds with no expectation other than a hope and a prayer. The seeds were delivered quickly to my surprise. All 3 germinated in less than 3 days, nice surprise. So far so good and I could not be more happier. Thank you Seed King, you made the entire experience simple, informative and successful. Once my female plants begins to mature I will post a pic.

Bubba Kush seeds are worth every penny! They are full of life, vigorous, and absolutely beautiful. She is starting to bush out as her indica roots take hold. Can't wait to post some growing photographs of her. Thanks Seed King!!!

I received 5 seeds and planted them in 10-gallon cloth pots outside in the Florida weather. Only 3 sprouted, and of those 3, one rotted away. The other two though are growing nicely. One is about 15 inches tall, while the other one, planted a little later, is about 1/4 that size.

Not one popped super disappointed